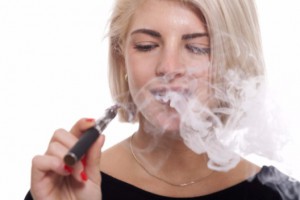 Opponents and supporters of electronic cigarettes have different opinions as to whether or not advertising sweet flavored e-liquid attracts teens to smoke e-cigarettes. According to the American Academy of Pediatrics, adolescents ages 12-17 have experienced a 256% increase in exposure to e-cigarette ads over the past several years.

Many opponents believe that several electronic cigarette companies, such as Blu, glamorize electronic cigarettes by using celebrities such as Jenny McCarthy to advertise and promote products to the younger generation. The Center for Disease Control (CDC) states that e-cigarette smoking among middle and high schoolers from 2013 to 2014.

However, a study published in 2014 in the Nicotine and Tobacco Research Journal shows that non-smoking teens have a low interest in electronic cigarettes even when presented with enticing flavors. Professor Saul Shiffman of Pinney Associates led a team that surveyed 216 non-smoking teens ages 13 to 17 regarding their interest in a series of e-liquid flavors. They were asked to rate their interest from 0 to 10. Results showed a very low interest rate from teens in using electronic cigarettes. “Flavors just didn’t seem to matter to these nonsmoking teens,” said Shiffman, a professor of psychology at the University of Pittsburgh.

The debate continues on both ends as to whether or not electronic cigarette advertising affects teens and their interest in e-cigs and flavored e-liquids.